Oil was on a good run for a while there — so what the heck just happened? What’s the price of oil these days?

Calgary is one of the few places where you can ask someone that question and reasonably expect them to know the answer.

As a city, we follow the ups and downs of this particular commodity with an intensity that borders on obsessive. Our collective mood rises and falls with the price of crude.

So, how do we feel now that the gains of 2018 have been wiped out in a wild week of sell-offs?

The year started out so promising, continuing an upward trend that began last summer. Prices had surged by more than 50 per cent between June and January. But then, last week, wham! Oil plunged 10 per cent in the span of seven days, and closed Friday below $60 a barrel for the first time this year.

So, what’s next? Will prices bounce back or continue to slide?

Hard to say. The forecasts to date have been all over the map. Just last month, some American analysts had been calling for a banner year in oil. Sure, maybe. But Calgary-based economists say it’s probably wise for us to temper our expectations and our hopes.

So let’s take a look at some of the numbers, and the reasoning behind the seemingly contradictory projections. Because here in Alberta, it matters. Government policy and personal aspirations are tied to the best guesses of experts. And bad forecasts lead to trouble.

Major investment banks in the United States made headlines recently with some bullish predictions about oil.

Citigroup said in January that prices could crack $80 a barrel in 2018. Goldman Sachs also trotted out the $80 figure in a forecast at the beginning of February.

Canadian banks have been more measured, calling for average prices in the $54 to $57 range for 2018.

Jack Mintz with the University of Calgary’s School of Public Policy expects those forecasts to be more in line with reality. Even before last week’s correction, he questioned some of the more bullish projections that had been put out there.

“I’m a little bit more pessimistic about oil prices,” Mintz said in an interview on Feb 2.

So who’s right? The bulls or the bears?

The reality is: it’s complicated.

There’s a science to it, but it’s also a bit of a dark art — especially when you introduce the human factors of the market.

That said, let’s take a quick look at some of the major price drivers that have been at play recently.

In the simplest economic terms, prices tend to fall when supply exceeds demand.

That was the situation in 2015 and 2016, as the world produced more oil than it burned. Soon, a glut of oil developed. And we all know how that turned out.

Things changed in 2017, though, as global demand for oil grew, while production fell. Add it all up, and the world consumed more oil than it produced last year, according the U.S. Energy Information Administration (EIA).

And the growth in demand is expected to continue. Sometime in the next few months, the world is expected to surpass a notable threshold and consume 100 million barrels per day.

On the flip side, though, production is also ramping up — especially in the United States, where the shale oil boom has continued to surpass expectations. Once an oil-thirsty nation, the U.S. is now on pace to become a net exporter by 2022, according to the EIA’s latest projections.

All in all, the agency expects worldwide oil production to catch up to consumption in 2018, and even slightly exceed it. 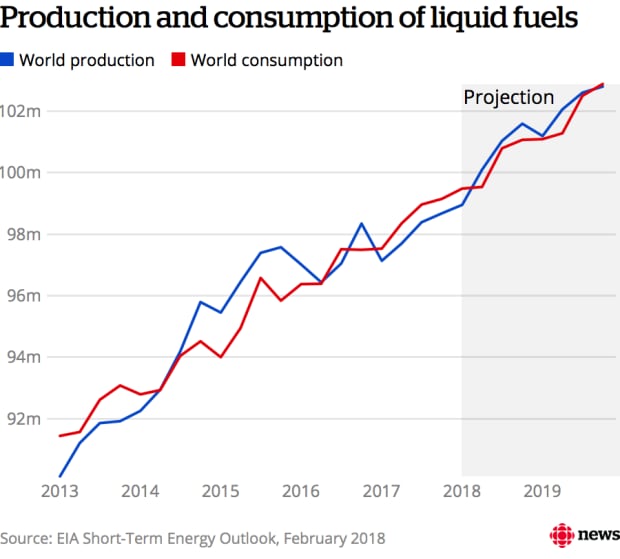 Other forecasts have suggested U.S. shale production could grow even faster than the EIA predicts, however. If those turn out be right, we could be looking at another oversupply of oil, which would likely push prices back down.

Mintz noted the recent ExxonMobil Global Outlook, in particular, which suggests shale oil output could grow by nearly 10 million barrels per day within a decade.

“That is really serious,” he said.

“If that projection is correct, we are in a sustained period of relatively low oil prices.”

So why have oil prices been on such a run, then? (Up until last week, at least.)

Martin Pelletier, a portfolio manager with Calgary-based TriVest Wealth Counsel, believes it had a lot to do with the growth in global demand and anticipated increases in inflation.

That, he said, prompted speculators to place bets on the price of oil continuing to rise. A lot of bets.

“The spec position in crude oil over the last couple of months has skyrocketed,” he said.

“At one point, it was 1.4 billion barrels of oil. Now that’s unheard of. I’ve never seen that in my entire career.”

The risk now, he said, is that speculators will get nervous and rush to sell off their significant holdings.

The last time the speculative position was anywhere close to this, he noted, was in July 2014 — right before oil crashed.

“But that’s something that, if I’m an oil investor, would be keeping me up at night.”

The case for cautious pessimism

If there’s a lesson in being overly optimistic about oil prices, the Alberta government has learned it over the past year.

“They haven’t been as pessimistic in their expectations as they probably should, in order to make conservative budget projections,” said Trevor Tombe, an economist with the University of Calgary.

The budget released last spring was based on an assumption that West Texas Intermediate would average $55 for the fiscal year. But the government had to quickly revise that estimate just three months later, down to $49.

Six bucks a barrel might not sound like a lot, but it can have a major impact on the bottom line. In ballpark terms, the province estimates that every $1 difference in the price of oil, over the course of a full year, translates to a $310 million difference in government revenue.

Of course, this is not a new phenomenon.

Previous governments have been caught, too, by assuming prices would be higher than they actually turned out to be.

“That’s the Alberta problem,” said Mintz. “We keep doing that and then we keep running these very big deficits, as a result.”

Tombe agrees and says, when it comes to making forecasts, a healthy dose of humility is also advisable.

“No one can predict what future commodity prices are going to be — not governments, not industry, not oil and gas companies, not analysts,” he said.

Given how important oil is to the provincial budget and Alberta’s economy as a whole, both economists believe it’s better to err on the low side with price assumptions.

Then, if you’re wrong, it’s more likely to be a happy surprise.